DOG SPORTS AND GENETICS, WHY DOES IT MATTER?

Why does the sport of I.P.O matter in the selection of breeding stock in the German Shepherd?

IPO is a three-part sport which includes Tracking, Obedience and Protection phases – the dog must pass all three phases in the trial. To succeed in the protection aspect of the sport, the successful IPO candidate must possess a basic level of instinctual drives, solid nerves, desire, and willingness to perform the work with their handler.

The specific drives which must be present are prey (desire to chase an object based on visual cues) and fight (desire to defeat the prey object). The other very important drive is “pack drive” or the desire to work for the handler. While it’s helpful if the dog possesses other drives, they are not nearly as essential as strong prey and fight drives and pack drive.

When we talk about “nerves” we are referring to the dog’s core confidence. A “nervy” dog is one who gets stressed and worried easily – often flipping into forward aggression or fear inappropriately or very easily. This is the classic fear-biter, that puts on a show of aggression, to push away a potential threat. A dog with “solid nerves” does not see a threat easily, and is much easier to train in the sport. Personally, I would think twice about training a dog with weak nerves and I would never breed one either. That’s why we know our dogs: because we train and work our dogs. We feel fear-biters or sharp dogs is mostly a genetic characteristic.

So how does genetics and I.P.O intersect and why is this important? The German Shepherd Breed after World War II essentially became divided into 4 sub-breeds, or sub-gene pools so to speak. The four main Gene Pools are called “The A.S.L” or the American Show Line Shepherd”, the East German (D.D.R) and Czechoslovakian German Shepherd from the Eastern Block (Warsaw Pact Countries) that were raised in government kennels for military duty, and the West German High Line Showline Shepherds and Working Line Shepherds. Some people separate the D.D.R dogs from the Slovakia and Czech dogs (now that Slovakia and Czheck Republic have been split up) . Some separate them, but we lump the D.D.R dogs and dogs of former Czechoslovakia as one basic gene sub-pool.

There are hundreds of websites that can explain to you what the differences are between the A.S.L, the D.D.R/Czech dogs and the West German Show-line and West German Working Line dogs. We recommend before you buy a puppy from us that you educate yourself on the various kinds of German Shepherd Dogs available on the market today. Literally hundreds of pages have been written on this subject. We have written a short excerpt on this subject on our site that can be found at this link: “Different Kinds of German Shepherds”. This genetic diversity in the breed must be somewhat understood by the prospective buyer, to get a sense of the various lines, or genetic sub-pools as we like to refer to them, in the breed. We focus on the West German working lines, with occasional West German Showline (with drive) added into our genetic stock. We invite you to read our “Ancestors” page, to understand the genetic overall make up of our dog’s ancestors and our “Titles” page, to understand what the various dog titles in their pedigree actually mean.

So while the German Shepherd is indeed one breed, the various gene “sub-gene-pools” are rarely crossed, and in essentially doing so, you are breeding within a specific genetic sub-pool, perfected over 75 to 80 years of breeding since World War II, where certain characteristics and behaviors are more easily developed from dogs derived from one gene pool versus another gene pool within the same breed. In other words, by breeding within one genetic gene sub-pool of dogs, you are able, via selective breeding over time, concentrate certain physical as well behavioral characteristics.

All puppies are cute. However, when selecting a breeder, you are selecting the breeder’s bloodline. Essentially, when selecting a breeder, you are selecting the genetics of that breeder’s ancestors in that line.That’s why a part of our website is dedicated to ancestors. We want you to visually see, via pedigree link and via photographs of the dogs the working ability, that genetically make up your pup. So while all dogs can make great pets, not all dogs have the ability to be working dogs. That’s why we focus on European derive working lines..and that’s what you’re buying from us. We are very proud of the bloodline we carry. 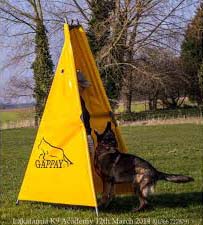